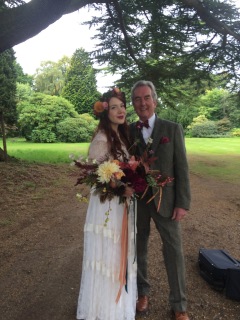 Emma and Chris’s big day was quite an occasion held deep in the woods on the Errol estate outside Dundee. This was to be Emma’s perfect wedding and indeed everything was quite perfect. Including the weather which, in Scotland in September was almost unbelievable. The couple’s guests from all over the world with Emma’s family joining us from Finland and Chris’s from Ireland plus many of their great friends whom they had met on their journeys. The ceremony included elements from both their cultures including a band warming from Ireland and reading in Finnish and even a hand fasting from their adopted Scottish home. 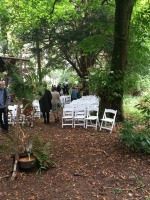 Emma and Chris decided to write their own promises to one another and they eventually sent them through about a week before the wedding so that I could print them out for them to read to one another. However, the two of them had been up most the previous night and had separately re-written their promises so they bore no relation to anything I had in my script – not a dry eye in the glade and a somewhat confused celebrant but so what?

Emma chose an extract from April Rise by Laurie Lee to end the ceremony with: 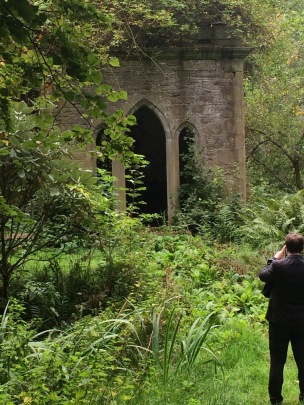 If ever I heard blessing it is there

Where birds in trees that shoals and shadows are

Splash with their hidden wings and drops of sound
Break on my ear their crests of throbbing air.
Pure in the haze the emerald sun dilates,
The lips of sparrows milk the mossy stones,
While white as water by the lake a girl
Swims her green hand among the gathered swans.
Now, as the almond burns its smoking wick,
Dropping small flames to light the candled grass;
Now, as my low blood scales its second chance,
If ever world were blessed, now it is.”