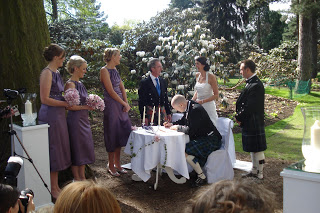 This is the John Muir Grove at the Edinburgh Botanic Gardens one of the most special and spectacular wedding venues in the east – as long as it doesn’t rain. The Botanic Gardens have just completed a major refurbishment of their indoor venues and the Caledonian Hall, where Lindsay and Gregor held their wedding dinner, is grand, fairly formal and perfect with all your guests around the single long table. It was rather strange to have people wandering around close to your chosen wedding situation because, of course, they don’t close the Gardens so people drift by and watch your ceremony, from a distance to be honest, generally with their mouth open because the setting is just breathtaking. The grove is formed by a stand of giant Redwood trees and surrounded by rhododendrons in bloom at this time of year and by acers that will be spectacular in the autumn.

It had been raining every day for five days before their wedding but in her texts to me Lindsay was adamant that she was having her wedding outside in the grove. “It will be fine Brian, don’t worry.” She was correct, it was sunny but not very warm if I am honest. Their ceremony was beautiful. They had hired Keith Murray a classical guitarist to play as the guests arrived and during the signing of the schedule but his principal duty was to play “Wild Mountain Thyme” as Lindsay entered. Well, not so much entered as strolled around a winding path, past all the azaleas in bloom, led by her bridesmaids. Just wonderful. Lindsay and Gregor had written their own ceremony and chosen the music and the readings and this is one I would like to share. It was read beautifully by Robin, Lindsay’s brother: 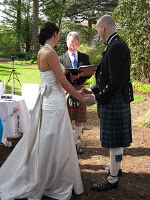 The sun danced on the sea with a sparkling smile,
As two lovers sat quietly, alone for a while.
Then he turned and said, with a casual air
(Though he blushed from his chin to the tips of his hair),
“I think I might like to get married to you”

“Well then, she said, “Well there’s a thought,
But what if we can’t promise to be all that we ought,
If I’m late yet again, when we plan to go out.
For I know I can’t promise, I’ll learn to ignore
Dirty socks and damp towels strewn all over the floor.

So if we can’t vow to be all that we should
I’m not sure what to do, though the idea’s quite good”.
But he gently smiled and tilted his head
Till his lips met her ear and softly he said

“I promise, to weave my dreams into your own,
That wherever you breathe will be my hearts home.
I promise, that whether with rags or with gold I am blessed
Your smile is the jewel I will treasure the best.