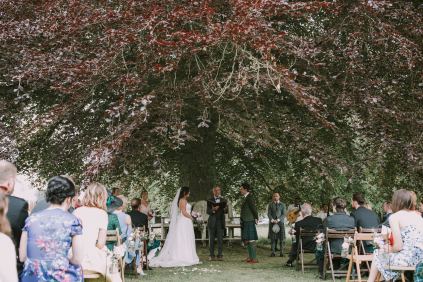 Travelling up everything was fine and rosy, a bit overcast but it will be fine I thought to myself. As I parked I noticed that Nicola and Iain had decided to have the ceremony outside, underneath the beech tree. “So, we’re outside then Henry?” I asked, just for clarity. Henry is lucky person who owns Myres Castle – not as glamorous as it sounds as, at that moment, Henry was laying the chairs out for the guests. The swing band arrived and set up beneath the tree behind me.

The ceremony was ever so special and Nicola and Iain had chosen readings that I had not heard before like this, which Carol read:

She gave him her hand and he held it tight.

Together, they set off down the unknown path in front of them.

Sometimes they walked slowly; sometimes at a quicker pace.

Sometimes they ran so fast it felt kind of like flying.

Whenever he lost his footing, she steadied him, and whenever she tripped, he helped her back up.

Whenever she grew weary, he’d carry her.

Sometimes they didn’t know which direction to go, but though they would occasionally lose their way, they never lost each other.

They wandered contentedly and lived happily, forever and always side by side.”

The highpoint of the cermony was when we sang a song, Stand By Me by Ben E King accompanied and lead by the swing band but by this point I could see Henry struggling up the path with an arm full of umbrellas.

There is inspiration everywhere for your own special vows and Nicola and Iain had taken theirs from the 2012 film The Vow and they were beautiful:

I vow to help you love life,

To always hold you with tenderness,

And to have the patience that love demands, to speak

When words are needed, and to share the silence when they are not

I promise to live within the warmth of your heart and always call it home.

I vow to fiercely love you in all your forms,

I vow to love you, and no matter what challenges might carry us apart,

We will always find a way back to each other

I declared them married, we signed the paperwork, I announced their grand exit.

And the rain stopped.

And the sun came out.

It was a wonderful and special ceremony and Nicola and Iain were good enough to send me this:

“We are so happy we found you to conduct our wedding ceremony. Not only did we think you did a fantastic job, many of our family and friends have commented on how great you were, and that you were a “class act”. You made everyone relax, and your quick thinking when the rain came on meant that nobody got soaked! We would recommend you to anyone looking for a Humanist Celebrant”