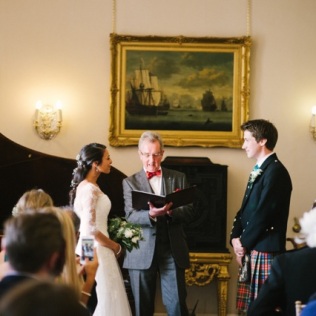 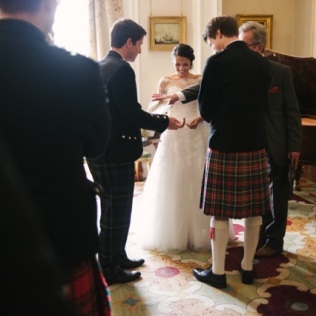 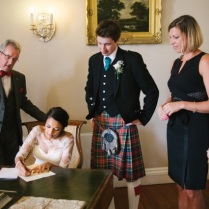 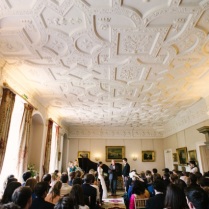 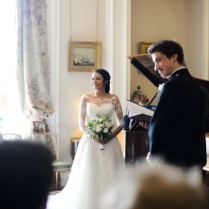 Those of you that I have married will know that my middle name is Winton, a family name that had passed through the generations of my mother’s family. If you look up, as I have done, the origin of the name Winton you discover that there are two branches, one down in the west country and one in Scotland and the Scottish Wintons all appear to have originated from one small village in East Lothian, which is where Anushka and Malcolm chose to get married – in the actual Winton House.

And what a venue! The driveway as you approach it is enough to convince you that it is a very special place and as you enter it becomes even more apparent. Anushka and Malcolm’s ceremony fitted perfectly into these surroundings but before it even began their guests, who had joined them from all over the world, were submitted to, or do I mean, took part in, a treasure hunt around the extensive grounds. Suffice to say that from the atmosphere in the room it was apparent that they had all got along very well but I still don’t know who won. Oh, yes I do, because the two people who found the package with the pens came forward and as their surprise witnesses.

The ceremony was full of unique and unusual moments. This reading I had never heard before:

Marriage is not
a house or even a tent
it is before that, and colder:

the edge of the forest, the edge
of the desert
the unpainted stairs
at the back where we squat
outside, eating popcorn

we are learning to make fire

and they wrote and read their own pledges to one another:

Malcolm    I promise to remember why we fell in love

Anushka    I promise to remember why we fell in love

Malcolm     I promise to continue to organise treasure hunts

Anushka     I promise to tolerate your endless schemes and puns

Malcolm   I promise to be the best husband I can be

Anushka  I promise to be the best wife I can be

They were good enough to send me the following in their email with the photographs:

“We wanted to say a huge thank you to you for being the perfect celebrant on our special day. You were reassuringly relaxed, endlessly cheerful, and a charming host for our guests as they waited for the ceremony to begin. You went to great efforts to ensure our ceremony kept to who we are as a couple, and to the fun feel we wanted for our day, which definitely did not go unnoticed by our guests. Almost every one of our family and friends mentioned how beautiful and unique our ceremony was and how envious they are that we were able to have a humanist ceremony, and have you as our celebrant. Thank you for helping us create some of the happiest memories we could hope for.”