This is the very special walled garden at the spectacular Colzium House outside Kilsyth, north of Glasgow. I know that Joanne had set her heart on getting married in the walled garden and, as I drove through a shower on the way to the venue I thought that she might be disappointed. But, as if by magic, the grey clouds cleared and sun shone on a glorious afternoon.

We had a rehearsal the evening prior to the wedding and it was obvious from meeting everyone that this was going to be a relaxed affair with everyone standing around us, very much a part of the big day. The rehearsal was more about the stage management and the choreography starting with the essential decision of where, in the garden, were the bride and groom going to stand? I must admit that the selection was obvious to me from the moment I walked into the garden and saw the stand of three silver birches forming a beautiful, natural arch. 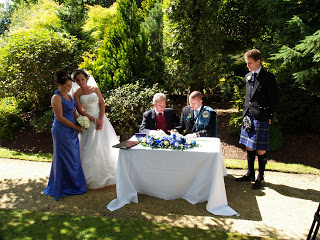 On the day itself we had the usual small glitches like the pianist being unable to find any power for his electric piano but we had a piper to pipe Joanne in and the bride and groom out so it wasn’t really a problem. Joanne and Graeme had written their own ceremony and had presented me with a very unusual twist. Normally the bride and groom would exchange their vows, then they would exchange rings (you can both at the same time of course), I would then declare them husband and wife and then we would sign the schedule. In this case they had chosen to exchange rings after we signed the schedule because they wanted to involve their guests in the ceremony. 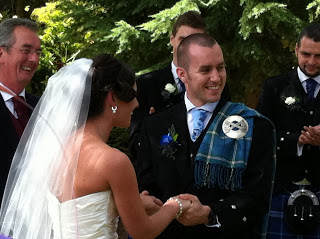 Always remember that it’s your wedding ceremony and you can do it however you want (within reason and the legal constraints, of which there are very few).